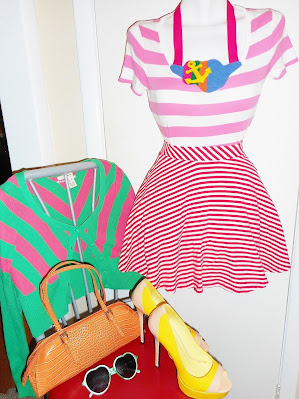 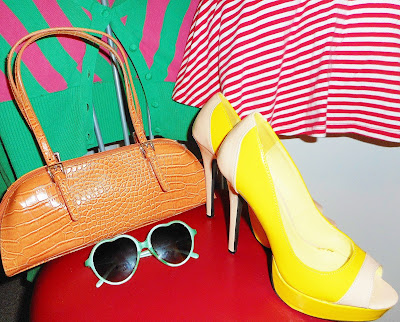 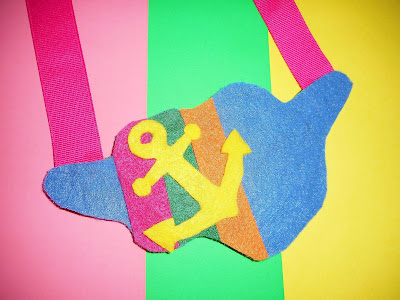 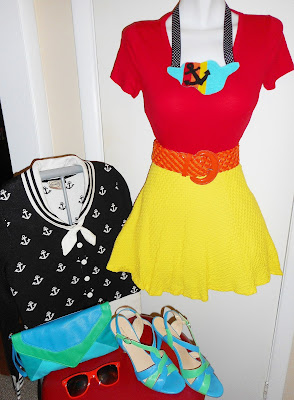 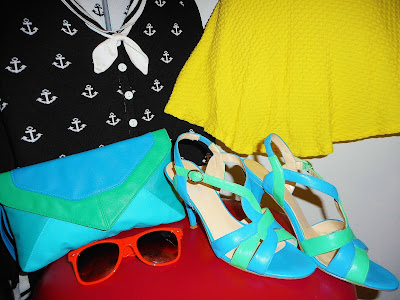 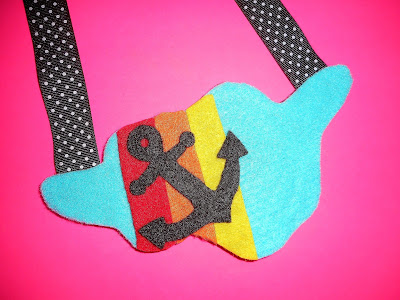 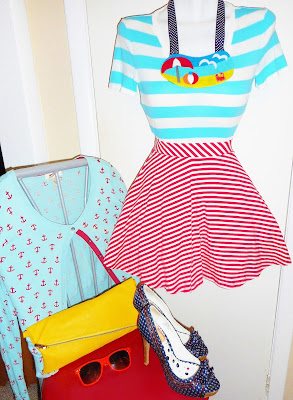 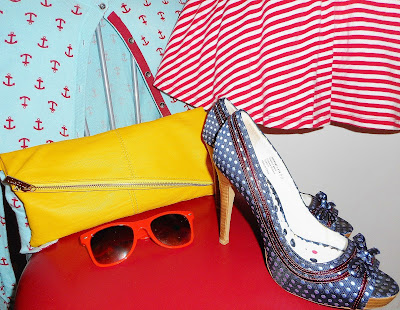 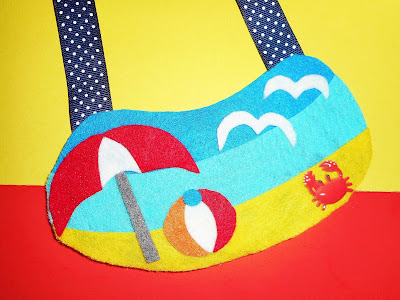 Or maybe I should say "out of summer."  Every year, without fail, I'm surprised by the supernova that is August.  The season seems to culminate in this third, fireball of a month -- the temperature is at its highest (despite the slightly darker days), and most people wait until then to go on vacation.  Then poof!  It's time for backpacks and pumpkin spice everything. (My Spidey senses tell me that I've used this bit about pumpkins in past anti-fall rants, but then what's a post about seasonal repetition without some recycled wordplay?).  It's as if people know that they have to squeeze out the last drop, and as part of those "people," I'm no different.  Except that I'm scrambling to post the rest of my warm weather favorites and backlog of fun-in-the-sun pictures instead of getting in that last round of beach time.  I'm none too optimistic that I'll have trotted them all out by Labor Day, so watch this spot for ice cream and mermaids well into October.  Nobody likes fall anyway, right?

So that's what's up with this beach scene and anchors, all three of which have been treading water in the kiddie pool of my imagination since April.  I was tempted to call at least one of the anchors the Nautical Nonsense Necklace but decided not to for fear of angering the SpongeBob people.  "Boat stuff," though, as I like to think of it, has always been pretty eye-catching.  My favorite type of boat used to be the sailboat on account of its bright, festive, well, sail.  I was so taken with sailboats that I thought I might like to climb aboard one one day.  Then I found out that they're among the most dangerous of the watercraft, what with being whipped about the sea willy-nilly due to that deceptively carefree, nothing-but-a-good-time sail.

Somehow, I don't think that's what Poison (or the SpongeBob people) had in mind.
Posted by The Tote Trove at 11:33 PM 1 comment:

Paper or Plastic? Teen Angst is in the Bag in John Green's Paper Towns 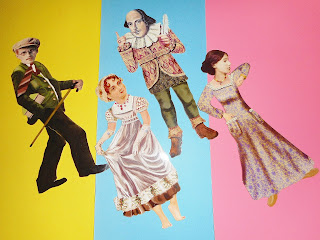 This past weekend I saw two pinatas: one in a store, and one in a restaurant.  As always, I was charmed by these paper sculptures and their ability to hide infinite treasures.  Which was somewhat fitting, considering that I'd just devoured John Green's Paper Towns, following it up with the movie chaser.  I don't have any pictures of pinatas, though, so I'm posting these paper dolls of dead writers instead.  If only there was a Walt Whitman . . .

A teen drama set in suburban Orlando, Paper Towns is the story of Quentin "Q" Jacobsen, a nearly nerdy high school senior who's been crushing on next door neighbor and most-popular-girl-in-school Margo Roth Spiegelman for forever.  Yet his affections aren't completely unfounded.  Once upon a time, Q and Margo had one of those idyllic, climbing-through-windows-and-riding-bikes kind of childhood friendships -- up until the day they discover a dead body.  It's an event that both bonds and divides them (at the scene, she takes two steps forward; he takes two steps back), foreshadowing their ultimate fate.  Since then, Margo starts running away, one time to join the proverbial circus, another time to tour with a band, her badass brand of joie de vivre earning her a reputation as a local legend.  So, Q is dumbstruck one night just days before prom when Margo again climbs through his bedroom window.  Before he knows it, Q is driving her around in his mom's minivan, an accomplice to her revenge prank spree aimed at her cheating ex-boyfriend and treacherous besties.  More self-indulgent than vindicating, it's an enterprise that involves squandering Margo's parents' money (or, as she rationalizes, her bat mitzvah money) on spray paint, Vaseline, and that infomerical classic The Club, among other young punk essentials.  All the while Margo vacillates between carpe diem and angry young woman mode, emboldening and exasperating nervous Nellie Q as she sprays her signature "M" in blue spray paint all over her victims' stuff.  Mysterious, manipulative, and something of a megalomaniac, Margo is the ideal foil for Q, who leads a quiet, self-imposed quarantine of a status quo life.  Their differences are never as glaring as when they're on the top floor of a bank looking down at Orlando, home to "the most magical place on earth."  Q says the view is beautiful, but Margo disagrees:

' "Here's what's not beautiful about it: from here, you can't see the rust or the cracked paint or whatever, but you can tell what the place really is.  You see how fake it all is.  It's not even hard enough to be made out of plastic.  It's a paper town.  I mean, look at it, Q: look at all those cul-de-sacs, those streets that turn in on themselves, all the houses that were built to fall apart.  All those paper people living in paper houses, burning the future to stay warm.  All the paper kids drinking beer some bum brought for them at the paper convenience store.  Everyone demented with the mania of owning things.  All the things paper-thin and paper-frail.  And all the people too.  I've lived here for eighteen years and I have never once in my life come across anyone who cares about anything that matters." ' (58)

It's a stirring speech, and Margo seems to embody every teen who has ever raged against the machine everywhere as she gives it.  And yet, something about it doesn't ring true.  I tried to remember that as I read the next 250 odd pages, warnings about unreliable narrators (technically Q, not Margo, although he brings his own biased baggage) humming in the back of my mind.

The next day, Q leaves for school starry-eyed, his heart set on hanging with Margo instead of being ignored by her in the hallways.  But then he finds out that she's vanished.  Her parents are so jaded by her disappearing act that they don't even bother to file a missing persons report, leaving the quest in Q's court.  Armed with just a few cryptic clues involving Woody Guthrie and Walt Whitman, he and his band geek buddies (a circle that unexpectedly expands to include one of Margo's popular gal pals), set out to find her.  After discovering that the term "paper towns" can refer to an abandoned subdivision, Q visits each housing-development-that-never-was in Central Florida, a wild goose chase that leads him to an even more unsettling abandoned strip mall.  Rife with rats and asbestos, the place is littered with moldy seashell souvenirs and mortgage company calendar pages -- and a blanket that smells just like Margo confirming that it is -- or was -- her secret hideout.  Further investigation uncovers another, more relevant, meaning of "paper town," which is a fictitious town invented by mapmakers to prevent copyright infringement.  Or, in other words, a fake town masquerading as real.  That's when it occurs to Q that Margo may not have merely taken the road less traveled; she may have taken a road that's not even real.  I couldn't help but wonder why she had to run off to some creepy warehouse.  Why couldn't she just barricade herself in her room until college like every other misunderstood adolescent?  And, more importantly, wasn't she afraid of the dark?  Not to mention the rats and the vandals (naturally, I assume there were vandals)?!  But then I realized that I was pulling a Quentin, trying to superimpose my own fears and feelings on her to determine what it was she "should" do.

I'm not going to spoil the ending.  Or even go into the many symbols and metaphors that Green so beautifully weaves throughout Q's narrative.  What I will say is that I liked it, and that my thirtysomething perspective seemed to enhance rather than hinder my appreciation.  More coming-of-age story than teen romance, Paper Towns is, at its core, a story about expectations: those we have for others, and those we have for ourselves.  It's also about the beauty of ordinary life and routine, and that such a life lived is a success instead of a failure.  Towns are what you make of them, just as life is what you make of it, too.  Sometimes that's hard to see when you still need a hall pass.

That having been said, the conclusion of the movie version is more open-ended, presenting Margo as slightly softer and her destiny as more inspiring adventure than cautionary tale.  Where the book implies that she's misguided and maybe a little hard hearted, the movie suggests that she's a free spirit following her star.  Which makes sense, because that's what movies do, especially movies meant for young people.  That's the thing about the book-movie relationship; it challenges you, each medium playing off the other to give you a story's deepest and most truthful version.

Something tells me that John Green would approve.
Posted by The Tote Trove at 11:04 PM 1 comment: