Bat Out of Spell: Happy Halloween Sans the Scary 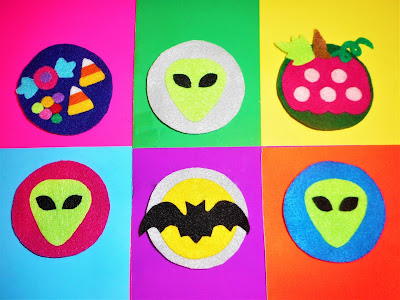 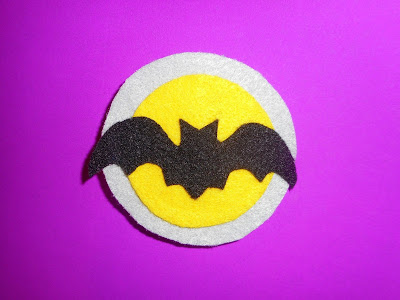 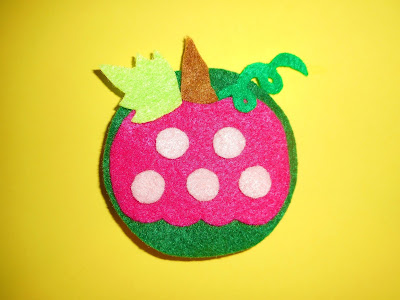 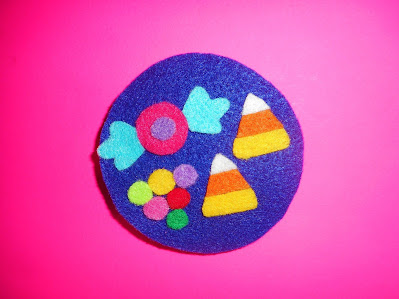 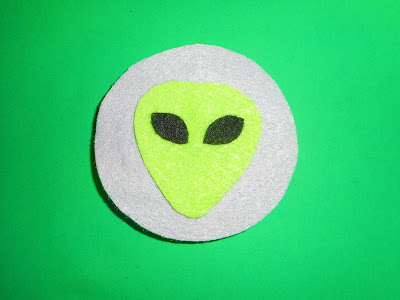 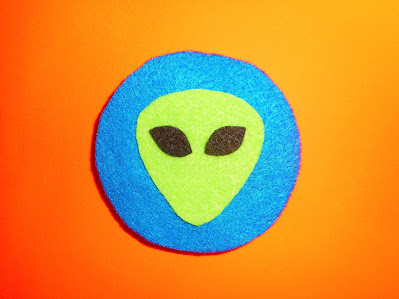 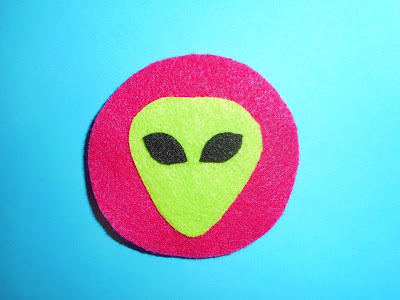 Some may say that Halloween is nothing without blood and guts and body-snatching bad guys and those weird, made-for-school movies about inspecting your candy for poison and razors.  But to all that I merely say, "Boo!"  So, here's to the sweet side of the scariest night of the year with a cute-to-boot barrette battalion.  Cartoonish candy, amiable aliens, a bat, and a polka-dot pink pumpkin (not a pumpkin with chicken pox or acne or worse as one unnamed observer commented) tune out the tricks and turn up the treats as we near the witching hour this year.  After all, these are friendly aliens, much like the one (okay, the anthropomorphic UFO) in the classic Halloween children's book (and one of my personal favorites) Space Case. 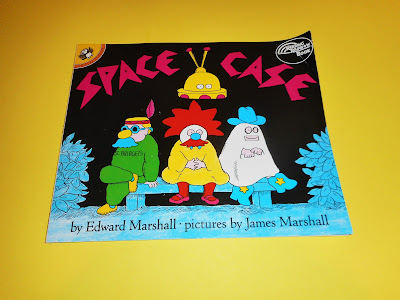 In Case, "The thing," as the alien/UFO is called, descends to Earth on Halloween to learn our ways -- and snag a Snickers or two.  The story is strange and mysterious and even wryly funny.  I particularly liked the bright, graphic cover and remember wishing that I could get it printed on a sweatshirt.  (It was the '80s, so this wasn't completely outside the realm of possibility.)  Anyway, when I think of Halloween stories, this is the one that comes to mind.  Sorry not sorry, Scary Stories to Tell in the Dark.

That said, I hope your Halloween was more marshmallow pumpkins than smashing pumpkins.  Which, now that I've said it, doesn't work on both levels because "Today" is a really great song.

Screw it; just enjoy those Snickers.
Posted by The Tote Trove at 11:13 PM 1 comment: 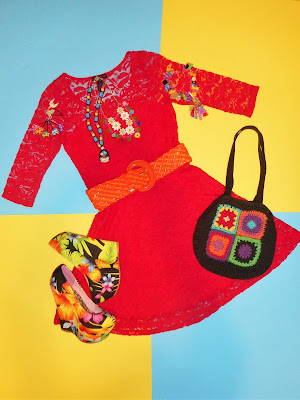 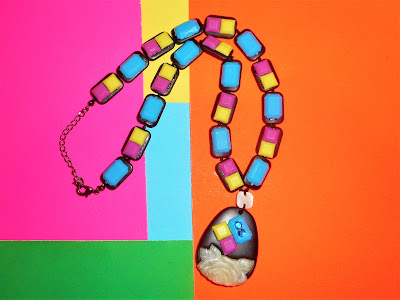 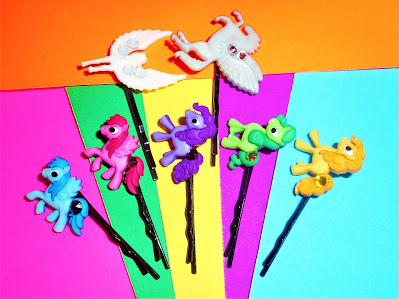 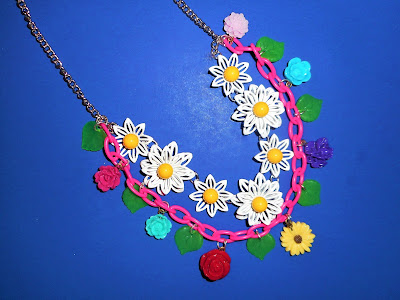 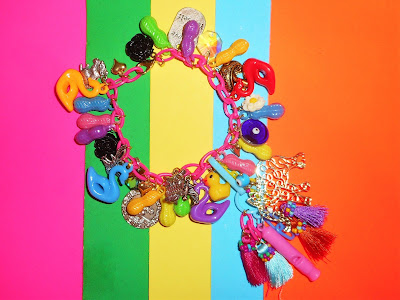 Let's face it.  These posts are always about something old/bold, new/true, and/or blue/glue-y (borrowed not so much, unless you count my occasionally unauthorized shots of other people's yards).  But they aren't always about books, and they're almost never about marriage.  Except for this one, which is about a book about marriage.  Sort of.

It's not often that I read something that hangs on in my head for days.  But The Marriage Plot did, with all the tenacious nerve of a drunken guest who just won't leave a wedding.  Written by Jeffery Eugenides, the same man who gave us The Virgin Suicides and Middlesex (full disclosure: I've never read Middlesex; I just like referencing it.) comes a coming-of-age novel about love, commitment, and, as always, the big, bad world. 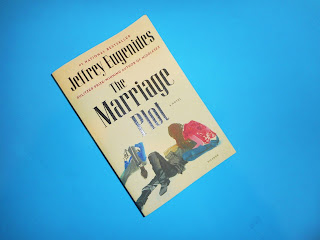 It begins in 1982 and is about Madeline, Mitchell, and Leonard, all seniors at Brown.  Madeline is an English major with a university president father, Mitchell is immersed in religious studies and is the son of hard-working immigrants, and Leonard is a troubled genius scientist from a broken home.  The first "oh, my" moment occurs when prim and proper Madeline flees graduation to visit Leonard, her estranged boyfriend, in the psych ward.  Brainy and beautiful, Maddy is so besotted with Victorian lit that she's gone and hand-picked herself her own dark horse hero.  No nice guys for her, especially not her nerdy friend Mitchell.  Mitchell is, in many ways, the Ducky of this story (even though I kept picturing him as Andy Samberg).  Kind and sensitive, he's a salt-of-the-earth Midwesterner whose mission is to search for truth and wisdom, no small part of which means protecting Madeline.  But his earnestness is no match for Leonard's brand of brooding brilliance.  After graduation, Leonard is chosen to join an illustrious research team on Cape Cod -- and he's asked Madeline to go with him.  Dejected but not beaten, Mitchell backpacks through Europe to study religion, ending up in an ashram in India.

The Marriage Plot starts out slowly.  In the beginning, Eugenides spends a lot of time discussing literature, philosophy, and what it means to be an English major.  Which can sometimes be a little heavy.  But it's necessary to lay the foundation, shaping this book into one of the best I've ever read.  It's got all of the ingredients for a great American novel: themes of class, gender, religion vs. science, first love, unrequited love, and the great what-if that yawns, chasm-like, after graduation.  True to his title, Eugenides plays with the marriage plot, that old staple of Austen, Bronte, and other Victorian-era authors, just as Maddy and her classmates play with that old lit parlor trick deconstruction, turning everything sacred on its head.  Clever and canny, Eugenides cuts to the heart of human relationships and the compromises we make to satisfy social norms.  All three main characters struggle to achieve an unattainable ideal.  Leonard, despite his misdeeds (and there are many), is a victim of the very biology he seeks to master, just as Madeline is held hostage by her allegiance to the subservience of Victorian mores.  And Mitchell . . . well, Mitchell tries to be the white horse guy.

Before I go on, I should say that I'm about to do that thing I sometimes do, which is to break the blogger-reader anti-spoiler contract in the spirit of some English major-y analysis.  So, if you want to read this book (instead of just my interpretation of it), then for the love of Derrida, stop reading this post.  On a related note, to anyone who thinks that this post has taken too much of an ivory tower turn for a blog about clothes and crafting, I say this: Bling thing, you make my heart sing.  You make everything -- glue-y.  Consider that my version of the dancing squirrel in that old Nick at Nite commercial about viewers who can't handle a serious message.

Okay.  Now that that's out of the way, we can dive into that spoiler.  At one point, Mitchell writes Madeline a letter in which he begs her not to marry Leonard.  Or, as he puts it, "Do not marry that guy!"  He professes his love in an endearing, self-deprecating, very Mitchell way and tells her that she has options, all but saying that he'll offer her his hand if only she refuses Leonard's.  But Madeline never responds and does marry Leonard -- only to have it all come crashing down Gothic novel-style a mere month later when he relapses and lands in the hospital.  A kind of mad-woman-in-the-attic-and-Heathcliff hybrid, Leonard represents all that is paradoxically caged and unhinged in Victorian literature, and it's too much for Madeline -- and for him.  So he deserts Madeline and eventually (and cruelly) asks for a divorce, leaving Mitchell, ever waiting in the wings, to pick up the pieces.  He and Madeline hang out, get close, and then get together.  But it's not the storybook ending that Mitchell's always imagined.  Something's off.  Mitchell knows it, and Madeline knows it, and although it kills him to do it, Mitchell brings up the letter.  He tactfully retracts his thinly veiled but ever-present marriage proposal in favor of a much more self-sacrificing proposition -- namely that Madeline, unlike all the Victorian heroines before her, choose not to tether herself to another guy, even if that guy is him, and instead follow her dream to become a Victorian lit scholar.  This was meant to be Mitchell's good deed, not nursing the sick in India.  Madeline accepts, and we know that this is what she's wanted all along.  Because The Marriage Plot isn't about Madeline and Leonard or even Madeline and Mitchell; it's about Madeline.  It's about idealism and expectations and cutting through all that to get to what's real and important.  That's what makes this book so heartbreaking.  That happy endings aren't what you were taught, that to get a real happy ending, you have to give something up.

Damn, Jeffery (Eugenides).  No wonder you won a Pulitzer.  Even if it was for Middlesex, which everyone on Amazon liked so much better.

So there you have it.  Great reads and fresh beads. That's how we roll at The Tote Trove.
Posted by The Tote Trove at 10:47 PM 2 comments:

Falling for Felt: Leaves of Sass 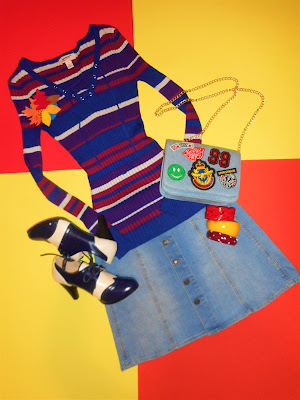 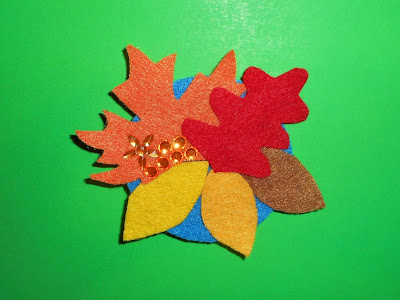 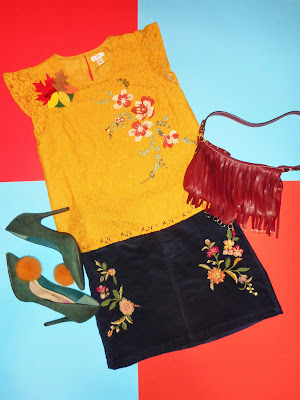 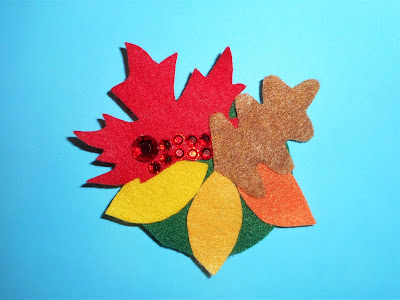 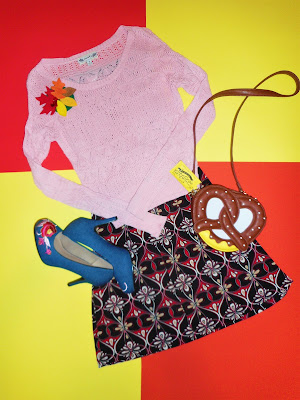 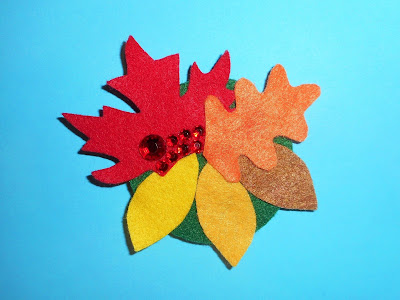 This post is all about fall, that diva of seasons that insists on going by two names: 1) the aforementioned playful descriptor of the tumbling leaves and 2) the more sophisticated and somewhat haunting autumn.  And really, who could blame it?  It's a very confusing time, cold one day and hot the next, with Halloween and Christmas decorations competing for space in the stores as you shuffle by in your parka and flip flops.

Speaking of change, I'm settling into my new house.  Which is more fun than I ever imagined.  You see, I've never thought of myself as a "house person."  People would talk about things like wainscoting and accent chairs, and my eyes would glaze over as I went on a shoe shopping spree in my head.  But now that I'm a homeowner (a word, by the way, that I used to find very pretentious), decorating is the best craft project and game of dress-up combined.  Each room is like an outfit, with its own colors and textures and personality, and each picture frame, knickknack, and pillow is like a shiny new accessory.  Just when I think I'm done, I get another idea, and then it's off to the races.  Or, more to the point, HomeGoods or Michaels.

On that note, I had a wonderful time making these leaf barrettes.  As autumn activities go, crafting beats bobbing for apples or jumping into piles of leaves that may or may not harbor earthworms.  I've been wanting to make these for years and finally said, now's the time!  Maybe this tree in my yard tipped the scales.  It's no maple, oak, or other icon of fall foliage.  But that's what makes it so special.  It's a snowball tree, so named for its round flower globes, which were white at the height of summer when the husband and I first saw them.  Now the blooms are a dusky purple, which, albeit less vibrant, have their own old-fashioned, autumnal charm.  Just like those withered old cornstalks that, light-leeched and decrepit, replace summer's bright kernels. 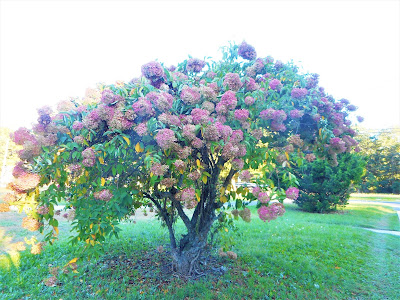 This is all getting very Walt Whitman.  You know.  If Whitman got glumly gushy about produce.  He's the guy who wrote Leaves of Grass, that classic (if convoluted) exploration and celebration of nature and the self.  Not to be confused with the guy responsible for the chocolates that come in the yellow box.  Now there's a dude who deserves a shout-out.  Maybe next time I'll post about Great Profiles in Caramel: Up Close and Delicious With Whitman and Russell Brand.