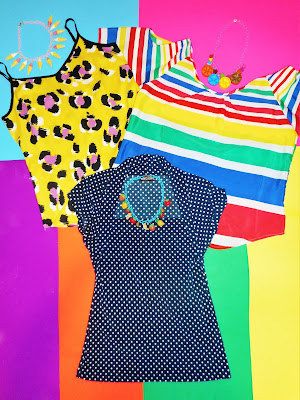 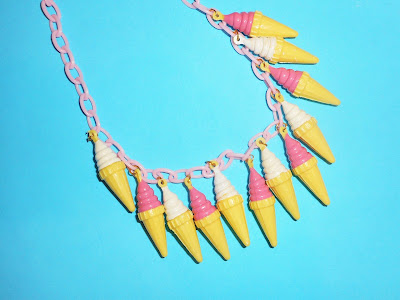 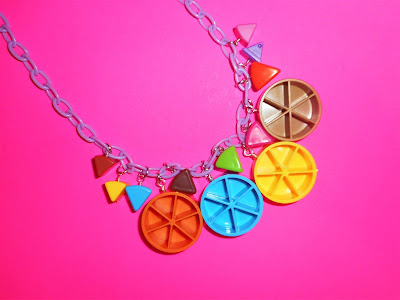 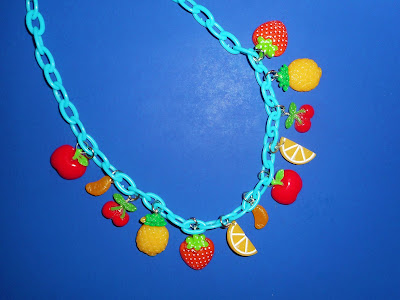 They say that people get married to have someone witness their lives.  (Also so that they'll have someone to nuke them Cup o' Noodles when they're sick.  Because technology can't do that yet, unless you're geeky and/or rich enough to own a robo-chef.)  But sometimes, I think, that's why people blog, too.  Even married people.  It's like saying, hey, I'm out here, having these thoughts as I make jewelry/bake cupcakes/paint landscapes/write music or whatever else kind of creative thing it is that people do.  Kind of like keeping a somewhat censored and very public diary without the unicorn cover and lock.

Blogging is a form of storytelling, a kind of letter from and to yourself -- and everyone else -- that reminds us that even when engaged in the seclusion of artistic pursuits, we are intertwined and connected.  And I've always loved storytelling.  Because there's no wrong way to do it.  Sure, you can hone your craft or take a class, but at the end of the day, your story is your account of what happened, and no one can tell it but you.

That said, this week I made some simple charm necklaces.  I used to think that it wasn't really art unless I'd suffered a little.  You know, spent hours teasing intricate designs from felt, using just enough glue so that everything would stick together, but not so much that it would seep through and make it all (symbolically) fall apart.  But lately I've taken a simpler view.  There's nothing lesser about attaching charms to a chain, not if you think the result is beautiful.  And creating beauty is what art is about.

Just this morning, the husband and I split a kiwi.  He said that kiwis are very seedy and hairy, and I said, yes, like a weird little man.

And now I'm repeating it here.

If that's not the nexus between inner and outer thoughts and marriage and blogging, then I don't know what is. 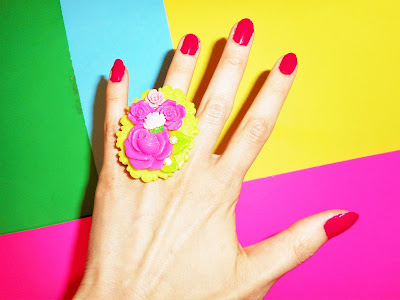 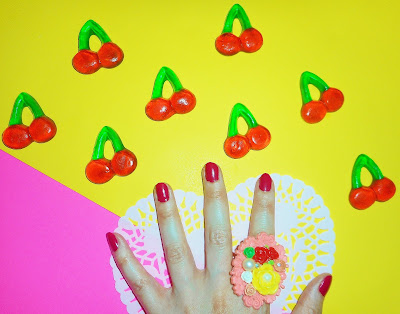 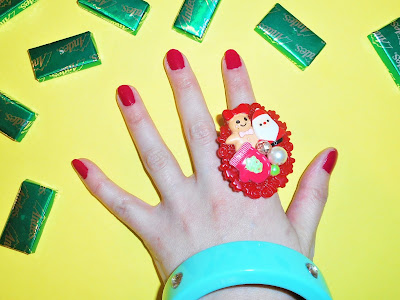 A quick word about "Grease".  I don't know about you, but a little part of me died the first time I saw Sandy swap her poodle skirt for those black leather pants.  That said, I usually avoid endorsing stories about women abandoning their true selves to land a (and let's be honest, in this case questionable) man.  But my love of great tunes -- and yes, costumes -- won out.  My apologies, feminism.

That said, love affairs may come and go, but baubles are forever.  Which is why I'm ringing in summer with yet another rockin' ring from Samantha at PinkBopp.  You may recall that I've purchased other awesome rings from this chic shop in the past.  One is springy, one is wintry (ok, Christmasy), and the new one, which is called Lady in Lime, is summery -- perfect for today, the first day of summer.  The fuchsia and lime really pop, and the tiny crystals remind me of morning dew (and Mountain Dew -- this ring being just the right shade of green!).  I wore it last week with a pineapple print blouse and friendship bracelet braid flip flops (and also jeans, lest I imply any Winnie the Pooh imagery).  Come fall I'll need an autumn addition to transcend the trifecta, giving me all four seasons.  So move over Vivaldi, '60s super group, and fancy schmancy hotel chain -- winter (er, autumn) is coming.

Speaking of summer, here are some pics to kick it off, from farm stand to sand.  And also, for some reason, cupcakes. 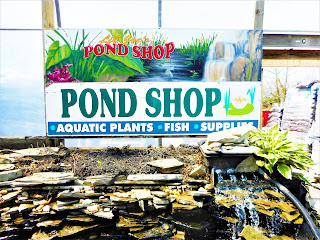 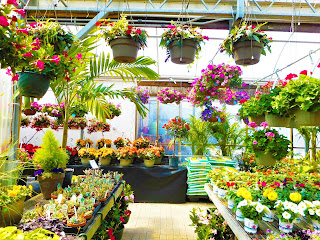 Going green here at home in Galloway.  No better place for a ring than a "pond shop." 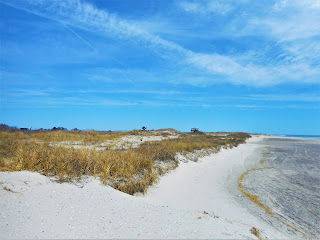 Beloved Brigantine Beach in all of its hotel room painting glory. 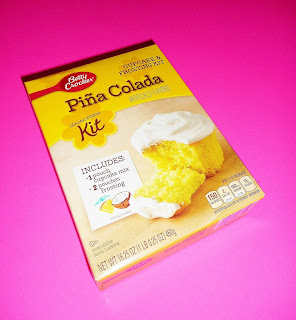 The box from some pina colada cupcakes I baked a million years ago.  Yeah, I hang on to pictures.

Which is, come to think of it, a pretty badass and feminist thing to be.
Posted by The Tote Trove at 7:44 AM 3 comments: 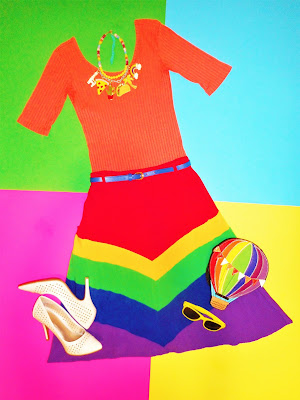 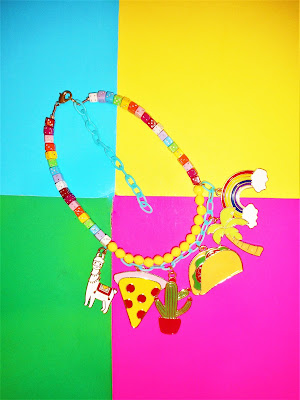 . . . is what you'd say, unironically (because it is his day, after all), if your dad told a joke beginning with "Knock knock, who's there?", or for crustier dads and more mature audiences, "A priest, a rabbi, and a minister walk into a bar . . .". Oh, Father's Day. You were invented by President Nixon ('cause Tricky Dick did one thing right) and kept kicking by Hallmark. But we see past the politics and profits to the ooey gooey sweet center of this celebration that simply states: I love you, man. If you look closely at life, then you'll see several parts of the padre, scattered helter skelter like so many fishing lures and foam fingers and tie tacks. There's that old rascal Father Time (as illustrated by these colorful watches on an appropriately masculine albeit glossy hardwood floor); A Wrinkle in Time, the classic story about a brilliant but flawed father who is missing, and finally, Miller Time, a tribute to that all-time fatherly favorite: beer. 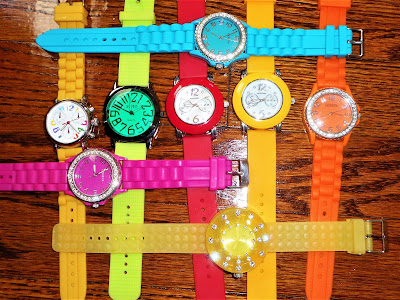 Speaking of which, we salute you, weird little peach double scoop top that doesn't seem like it would go with anything. Yeah you, creeping up on the rad rainbow chevron. (This is a nod, I realize, not to anything Miller, but to those old Bud Light Real Men of Genius commercials. As in, we salute you, Mr. Rolling Cooler Cooler Roller Guy, the man who has everything -- everything except a friend to help carry a cooler.) Weird little peach double scoop top, I half-heartedly bought you on clearance years ago because you were too cheap to pass up and ended up wearing you a ton, especially layered under sheer blouses that look like melted sorbet (how's that for poetry, oh hauler of the hot dogs?). And good thing, too, because you turned out to be a great backdrop for this Happy Hipster Charm Necklace, a bad boy piece of bling that boasts a llama, rainbow, palm tree, cactus, and, to go with those brewskis, a taco and slice of pizza. 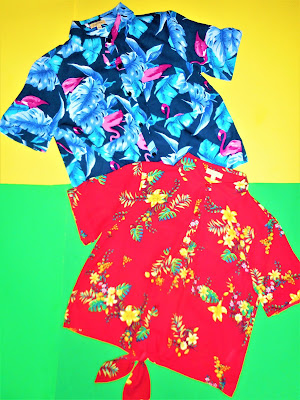 So, whether you crack open a Miller, Bud, or pink lemonade this Father's Day, we salute you, dads of America.

And also Mr. T, for making it cool for men to rock necklaces.
Posted by The Tote Trove at 9:39 PM 2 comments: 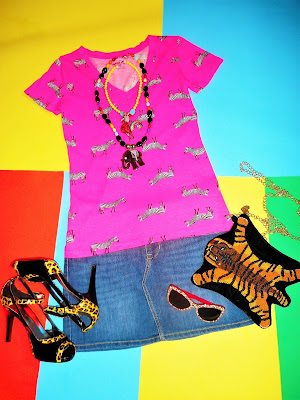 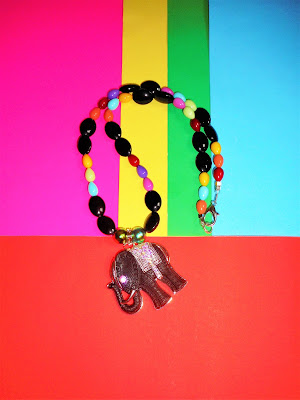 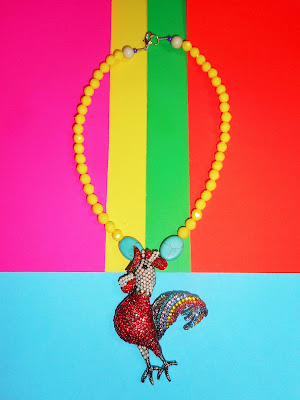 Because malls are kind of like zoos.  First off, you've got your mall rats (although, sadly, never Jeremy London look-a-likes).  Then there's feeding time at the food court.  And of course, the good and bad smells.  For instance, at my mall, there's the floral-sweet scent of Macy's Backstage and the mildew musk of the new, no-name furniture store.  And finally, there's the sea life-themed merry-go-round (this being the Jersey shore) in front of Forever 21.  The point is, anything can happen at the mall.  And apparently did, considering the flash mob-esque food court fight that broke out the night before I went Backstage.  Seriously; it was on the news and everything.

And you thought I was kidding about feeding time.

Macy's Backstage, by the way, is a new Macy's venue.  It's a floor of the store that's all discount stuff, displayed in that fashiony flea market way that we bargain hunters love.  As soon as I walked in, I thought, it's like Macy's and Marshalls had a baby.  A mini Marshalls, if you will (not to be confused with Mega Marshalls, which is a whole other thing).  My instincts weren't wrong; once I started scoping the racks, I saw a top and a smiley-faced succulent there that I'd recently bought at the actual Marshalls (thankfully, at the exact same low prices)!  Anyway, I picked up some makeup brush cleaner, and the cashier gave me a free shopping tote and a $10 off coupon for being one of the first 200 customers.  So, after doing a lap around the mall to peruse its other offerings, I went back and used the coupon on this sunglasses-wearing Luv Betsey watermelon purse.  It was priced at $20, so I got it for $10! 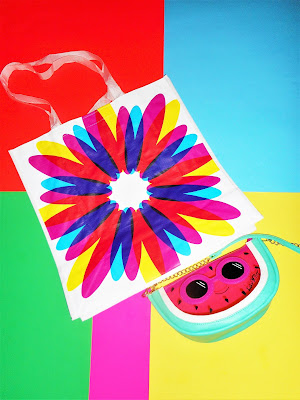 Which was much better than some dancing rhino-themed souvenir cup or jumping frog toy from the gift shop.

I guess malls aren't always like zoos.
Posted by The Tote Trove at 7:09 PM 5 comments:

The Drawbacks of Tiebacks: (Not So) Fast Food and Matters of Art 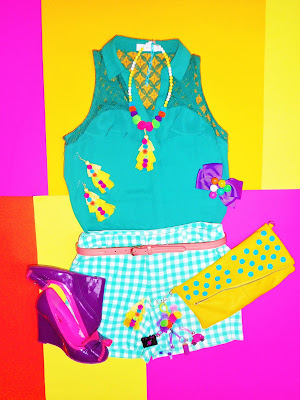 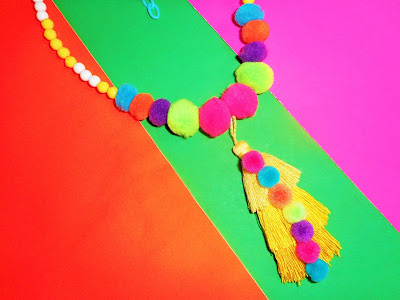 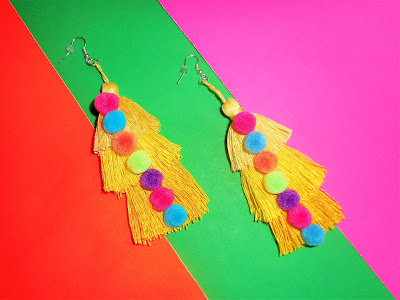 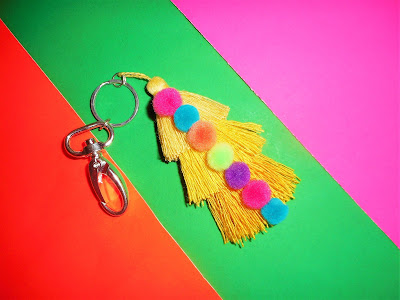 Ah, tassels.  First made popular, not by hippies, but by Scarlett O'Hara when she, in the ultimate necessity-is-the-mother-of-invention moment, tore down those curtains to make that green dress.  Fortunately, I didn't need to venture any further than the nearest craft store to get the ingredients for my latest passel of tassels and pompoms (a phrase, by the way, that I say far too much on this blog).  Not that my shopping trip wasn't without its own challenges.  Oh, big-box-craft-store-that-shall-remain-nameless, you tried to deny me my discount.  But I wouldn't let a little thing like a barcode-less coupon stop me.  Anyway, in a nod to Gone with the Wind's groundbreaking green dress, I paired my Yellow Rainbow Glow trio (that's what I named my passel; nice, no?) with an emerald ensemble.

Speaking of which, it's funny that a character named Scarlett is best known for wearing green, first for the aforementioned drape dress, second for the green-print white one at the Twelve Oaks picnic.  (Yes, there's the red dress too.  The one that gets her into all the trouble.  Still, it's a sad second fiddle-dee-dee to its less va-va-voom verdant sisters.)   Then again, maybe this color conundrum makes sense.  Because Scarlett is a woman of contradictions.  For instance, she stuffs her face before said picnic in the privacy of her own home (okay, plantation) so that no one will think her unladylike for stuffing her face in front of others.  She doesn't want to do this and in fact fights it, but it's an unwritten rule of the antebellum South, and, like the South itself, she surrenders.  Yet Rhett, if given the opportunity, would have seen past such subterfuge.  I think that if he'd said, right from the get-go, "Frankly, my dear, I don't give a ham (about your weird secret eating), then a lot of heartache -- and perhaps heartburn -- could have been avoided.

The same could be said for Mr. Darcy and Bridget Jones and lots of other iconic couples.  Which just goes to show that being a woman who likes food and falling in love (so a woman who, in other words, breathes), living in any time or place is in a real sisterhood of the traveling pantaloons situation.

Kind of makes you rethink sloppy seconds.
Posted by The Tote Trove at 9:14 PM 2 comments: