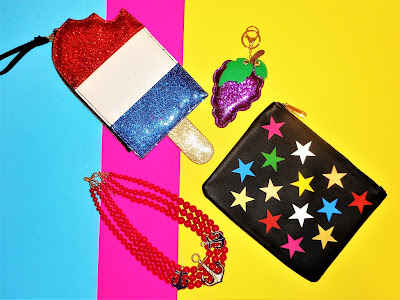 This blog isn't always about the things that I make.  Sometimes it's about the things that I buy.  And the last best things that I bought were from Charming Charlie.  The online version, that is, as the nearest brick and mortar is kind of far from me.  Anyway, you know how sometimes you order something, and it comes and you're like, ugh, this sucks?  Well, this was the opposite of that.  (And no, Charming Charlie isn't paying me.  Although I kind of wish they would.  CC, if you're out there, throw some bangles my way tout de suite.)  Every piece was bigger and better than I thought it'd be.  I was especially excited because I'd first spotted the grape purse charm last year, and it was still in stock -- at half price!

Speaking of the funky bunch (and no, I don't mean you, Marky Mark), it's time for a rousing round of "one of these things is not like the others; one of these things just does not belong."  (Sing it loud, sing it proud, Bert and Ernie.)  'Cause we've got an anchor necklace; a red, white, and blue ice pop wristlet; and a star-spangled pouch -- which are all very nautical -- and a bunch of sparkly grapes -- which is not.  Unless, of course, the nautical in question refers to a yacht instead of a speedboat/sailboat/down-and-dirty dingy.  And what's a yacht without big, juicy grapes being served by Paul Rudd in a Speedo?  (Too far?  I was thisclose to calling this post Hoarder Up.  So.  Restraint practiced and all of that.)

That said, enjoy the soothing sounds of the Enya classic that has undoubtedly been playing in your head since you first scanned this title.  Also that not-so-soothing Styx classic.  I could go on, but like Michael Stipe, I've said too much.

So much for restraint.
Posted by The Tote Trove at 12:58 PM 4 comments:

Thank You for Being on Trend: Golden Oldies Then and Now 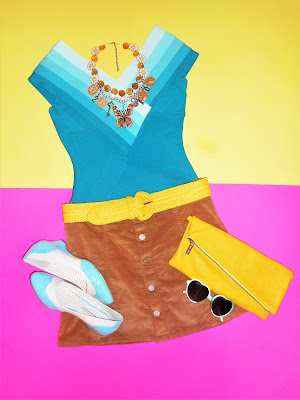 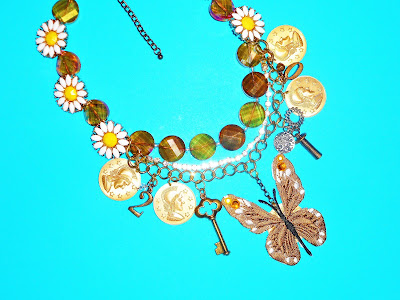 Go for the Golden Girl Necklace

Picture it.  Jenkintown, 1980-something.  A classic beloved '80s sitcom is featured on a current beloved sitcom that's set in the '80s.  That's right.  "The Goldbergs" yukked it up for "The Golden Girls" in a recent episode.  Now, this is the part where I ask myself, self, should I take a beat here to explain "The Golden Girls" and "The Goldbergs"?  Probably not.  I mean, it's not like you live under a rock or something.  But just in case there are any rock dwellers out there who just happen to have internet access, here it goes:  The Golden Girls are/were eccentric ladies living together in Miami, and the Goldbergs are an eccentric family living in a suburb of Philadelphia.

Now that that's out of the way, we can get back to our regularly scheduled programming.

In this episode, the Goldberg clan becomes smitten with the four feisty Floridians, humming along with the theme song (yes, even crotchety Murray [Jeff Garlin]!) and picking out their favorites.  Beverly (Wendi McLendon-Covey) is particularly taken with the idea of having gal pals to laugh with once her schmoopies are grown and gone.  So, as part of her Bevolution, which is her self-improvement plan (and yes, that's what she really calls it), she launches a mission to forge lifelong friendships stat, an ill-starred effort that involves strong-arming her fellow PTAers into bedazzling sweaters and answering to belittling nicknames.  Confrontations are made, heart-to-hearts are had, and hilarity ensues, all to the tune of a cover of the Golden Girls theme song.  Also, there's sledding on lunch trays (a failed ski trip somehow factors in).  Betty White does not make a cameo.  The only thing that could have made it more iconic would be Shaq doing commercials for Gold Bond (because of the gold, not the Shaq, as he's clearly '90s territory).  Well, that and a Betty White cameo.

So.  To celebrate this turduckan of cultural Culture Club-era camp, I made this gold Go for the Golden Girl Necklace.  Or rather, as I say in its Etsy listing, "gold-tone."  (This is The Tote Trove, not Tiffany's.)

Ah, gold.  The Big G.  What a winner.  It's the color of Beverly's big, bouffant hair, and the shade of the Miami sun.  Also of liquid gold Velveeta shells and cheese, which is something that domestic divas Beverly Goldberg and Sophia Petrillo (Estelle Getty) would never dream of serving to family.  Those two would get along, I think, what with their big mouths and manipulatively matriachal ways.  Or maybe they'd destroy each other, just like the dinosaurs.  (What?  The dinosaurs didn't destroy each other?  T-Rex ghost, you've been lying to me.)  But there's no need for a face-off.  Because . . . (sing it with me, now!), you make new (TV) friends but keep the old; one is silver and the other's gold(en).  Unlike the dinosaurs, "The Golden Girls" and "The Goldbergs" will never die, living on forever in syndication.

Sounds like a reason to gorge on shrimp parm and cheesecake to me.
Posted by The Tote Trove at 12:49 PM 2 comments: 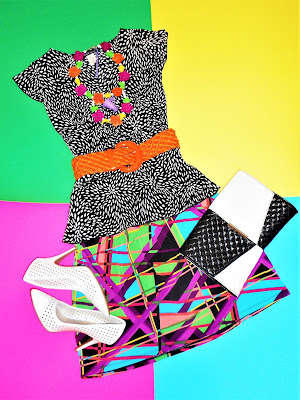 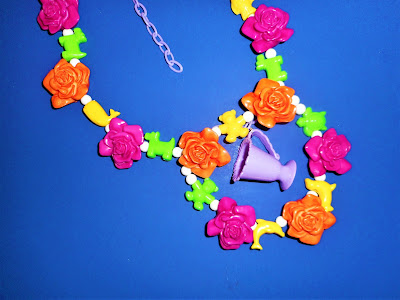 It's been snowing a lot in my neck of the woods.  Which I hate.  Because snow is cold and dangerous and prevents me from wearing my very best outfits.  Still, if you don't have to be out in it, it does have its charms -- e.g. curling up with a good book, Pinterest page, or premium cable binge-a-thon.  So, I took full advantage, traveling to sunny California to catch up on "Silicon Valley."  Also, I made this very tropical Fantastic Flora and Fauna Necklace.  You know.  To remind me that Memorial Day is slumbering somewhere beneath the permafrost.

So, "Silicon Valley."  This is a show that I shouldn't even like, but love.  As an artsy-craftsy girly girl who thinks "dress" when she hears the word "code," it seems unlikely that I'd be interested in the trials and tribulations of a boy's club of wisecracking technies.  Then again, "Silicon Valley" is really about a bunch of underdogs doing their thing, which is something I'm always on board with.  Also, I really dig wisecracks.

I can't help but root for Richard (Thomas Middleditch).  As the head of the pack, he's a beta alpha dog if ever there was one, the ultimate David to Corporate America's Goliath.  He's brilliant and painfully awkward and never stops trying to get his brilliance out there.  He's like an artist that no one understands but who knows he's got something special.  Of course, there's a part of me that sometimes thinks, wait a minute, though, he's not an artist.  He's an engineer promoting a product that's supposed to make people's lives easier.  But most people aren't as smart as he is.  So why doesn't he just add the Word-Help-Paperclip-clone Pipey (yes, as in Pied) thing to the software to walk people through it?  Sorry, Richie, but remember, this is the technically-challenged part of me ranting.  The trailblazing creator part still thinks you're badass.  Anyway, you do adopt Pipey.  And win over your biggest regular person user critic, Bernice.  So, well done.  But all of that, like everything else in this show, becomes moot because of some crazy plot shift that I no longer remember.  It's this chaos -- and Pied Piper's deus ex machina ability to rise above it -- that makes "Silicon Valley" such a great dramedy.

That said, if Richard has the goods, then Big Head (Josh Brener) has the life I'd most want.  Because no matter what troubles assail him (and there are many), his response is always, "whatevs."  In this way, he is high-strung Richard's foil.  He never lets his circumstances cloud his outlook, or a quest for power hamper his happiness.  When he discovers that he's a guest lecturer instead of a grad student at Stanford, he copes by showing vaguely computer sciencey movies, starting with The Social Network and ending with the sophisticated cyber stylings of You've Got Mail.  He's content to be the easygoing court jester, guzzling his ever-present Big Gulp the way most Pacific Northwesterners suck down Starbucks.

So, maybe he's on to something.  Because anyone who can make a sno-cone-like drink from snow can't be all that bad.
Posted by The Tote Trove at 3:59 PM 1 comment:

New Year, No Fear: On Wednesdays We Wear Black 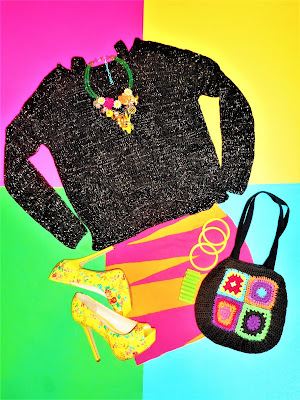 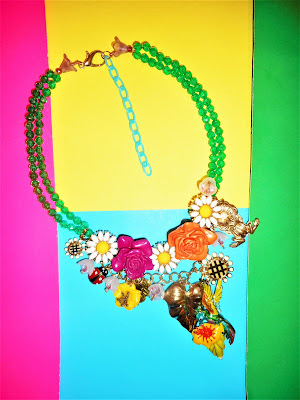 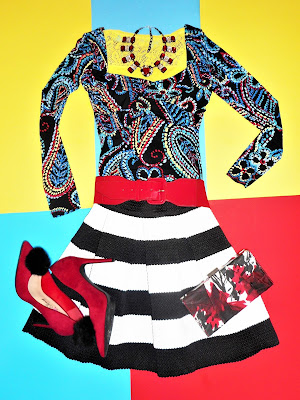 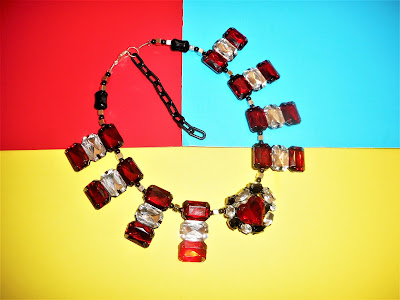 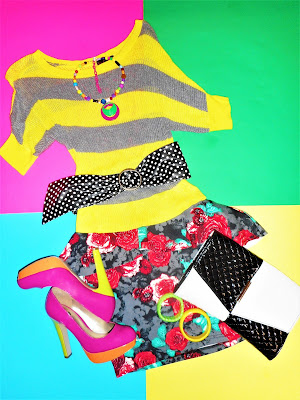 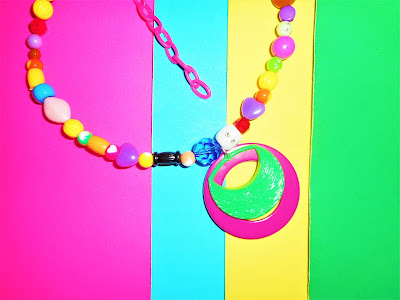 For this post, I had my heart set on a black and red rose-print cold shoulder crop top from the Kohl's line for Disney-Pixar's hit Coco.  Not to be confused with, "You go, Glen Coco!"from that other hit movie, Mean Girls, which has its own impressive merchandise.  (I've got the "so you think you're really pretty" compact mirror to prove it, as seen below with my until-now-never-been-stripped-of-its-cellophane DVD.  There was no need, as Mean Girls is almost always playing on TBS, Comedy Central, E!, WE, Ion, Oxygen, Pop, and/or Animal Planet.  Just kidding about that last one.  Then again, there is that wildebeest attack dream sequence or whatever, so who knows?) 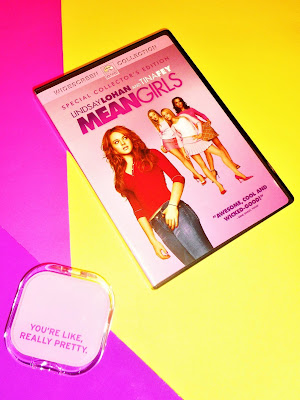 Anyway, I wanted to team the Coco top with a yellow lace midi pencil skirt from J. C. Penney's Project Runway collection.  But, alas, that too was sold out, forcing me to renounce my mid-priced department store product placement-themed ambitions and make it work, Tim Gunn style, with some stuff that in no way resembled what I'd planned.  Such is the roller coaster that is fashion blogging.

Speaking of which, a word about stretch bracelets.  When the beads begin to separate, however slightly, you know that your beloved bracelet is on its way to becoming a necklace.  Well, I know it's on its way to becoming a necklace.  You may just know that you're about to unleash a shower of rhinestone slider beads out into the world, sending a pack of mall-walking grannies scrambling in front of a Wetzel's Pretzels.  This happened to me with a much-adored, much-worn faux diamond and ruby stretchy stunner just before Christmas (not the Wetzel's Pretzels part, the repurposing part).  So I gave it new life by making the above darling Ruby Red Romance Necklace.  I did the same with Garden Glam Slam, which is similarly crammed with costume jewelry castoffs.  Hot Hoop, not so much, although the pendants are vintage.

Finally, if there's anything that fascinates me more than color, it's the absence of color.  Which is why I used this ironically named Vanilla filter on my outfit pics to dart to the dark side: 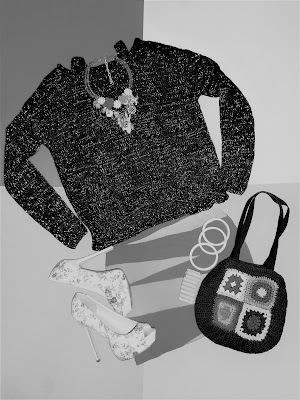 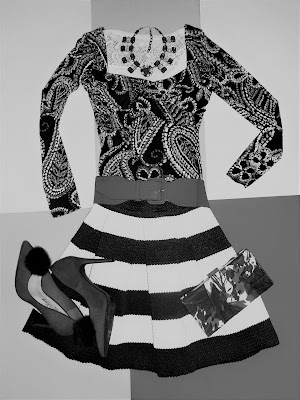 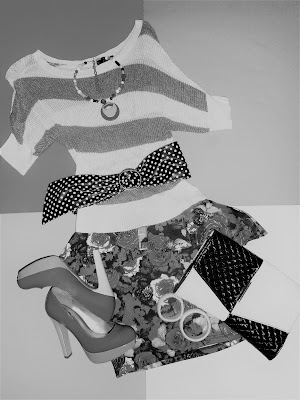 I love how the grayscale really makes the details pop, kind of like a close-up of a closet in a black and white movie.  So, it seems only fitting to ask, "(Compact) Mirror, mirror, on the wall, who's the fetchest of them all?"  Why, Ms. Addams, of course, and I don't mean Rachel Mc.  Indeed, the first daughter of darkness could have taught the Plastics a thing or two, both in sartorial savvy and scariness.

In closing (I know I just said "finally," but then, when have you ever listened to me?), no resolutions this year.  Because resolutions are just rules, and rules were made to be broken.  So, no rules, just right.