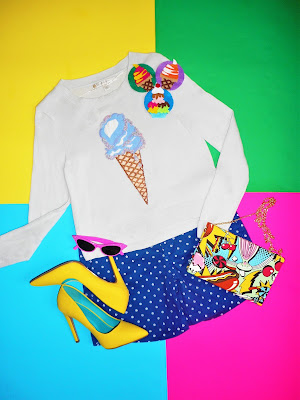 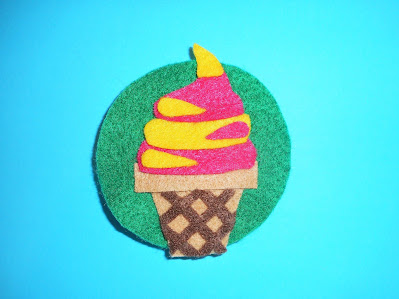 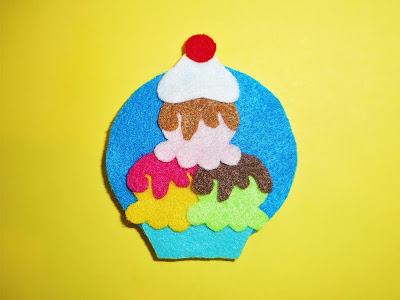 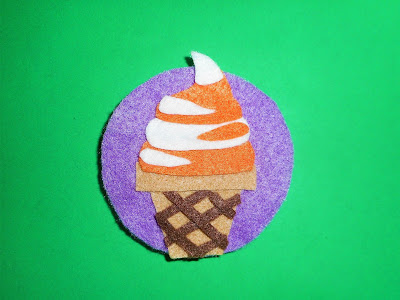 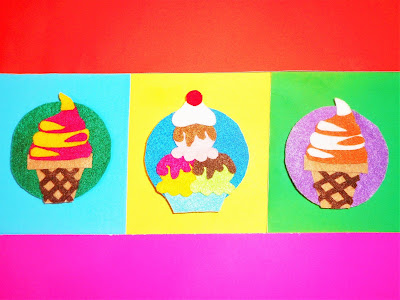 "We all love ice cream.  That doesn't mean we have to wear it."  So said Sue's bestie Brad to her on "The Middle" when Sue was trying to dress more grown-up to impress Sean Donahue of the perfect-Donahue-next-door-neighbors fame.  "But I like wearing things that are a little different," Sue protested.

The series finale of "The Middle" aired this past Tuesday.  So, in honor of it and Sue and all things quirky and different, I made these ice cream barrettes.  The sundae one is very similar to a barrette I made years ago (see below), only better.  I guess I learned something in my nine years of working with felt.  Just like I learned something watching nine seasons of "The Middle." 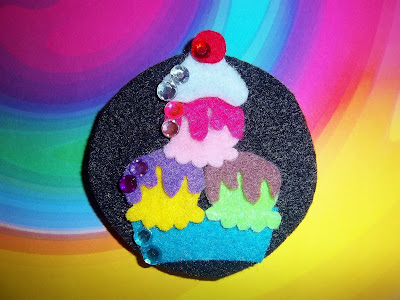 What can I say about this show that I haven't already said?  That it's about a lower middle class family trying to get by in middle America?  That it never got the attention it deserved because it's about ordinary, salt-of-the-earth Midwesterners instead of shiny Californians or jaded New Yorkers?  That it's as hilarious as it is heartwarming?  All of these things are true, but none of them capture the essence of this show or how much it means to me.

So the best I can say is that it ended the way it was supposed to.

Warning: There are spoilers ahead.  Not unlike all-star appetite spoiler ice cream.

Every character's story wraps happily, although not easily, which is fitting for the hard luck Hecks.  The focus of the hour-long episode is Axl's (Charlie McDermott) move to Denver to start a new job.  Frankie (Patricia Heaton) is beside herself about losing her oldest child (we know it's serious when she breaks into her nightstand cookies) but hides behind forced cheerfulness.  And she almost makes it, even on the long family road trip to deliver Axl to the Mile High City.  But then the kids start bickering about being without their cell phones (Frankie told them to power down when she found out that they'd blown through their data plan), and Axl says that they can take him off the family plan because his new job comes with a phone.  And Frankie snaps.  She makes Mike (Neil Flynn) stop the car, they all get out, and she goes on a rant about phones and family plans and how the plans keep the families together.  Then she says that it's the end of an era and that nothing will ever be the same, all against the backdrop of Indiana's wide, open spaces and, of course, that old road less traveled.  And  Mike hugs her and says, in his simple, wise way, that that's the way it's supposed to be.

Another show might have had Axl change his mind and stay in Orson.  (I'm talking to you, "Full House," using Michelle to guilt Uncle Jesse and Aunt Becky into abandoning their newlywed move to hole up, refuge style, in the Tanner family attic).  And another, entirely different kind of show, might have had him never return to Orson at all.  But neither of these scenarios would be right for the Hecks.  Which is why the flash forward sequence that comes next seems so seamless.

Years later, Axl is living in Orson again, and he has three shirtless, wild-haired, sullen sons just like him.  Brick (Atticus Schaffer) is a famous author of young adult novels that feature a magical backpack based on the one he used to call his best friend.  It's a dream come true for every awkward, book-loving outsider out there and gently reminds us that Frankie was right a couple of episodes back when she finally made peace with not being able to fix her weird kid.  Because now he's a weird adult who makes weird kids feel less alone in their weirdness.  After several false starts, Sue (Eden Sher) finally marries Sean, literal boy next door, doctor, and Axl's Mr. Nice Guy best friend.  This is her fairy tale ending, even if she had to go through being the almost-fiance of Axl's other best friend, the well-meaning but doofusy Darrin, to get it.  Who's officiating the ceremony?  None other than guitar-strumming, it's-hard-being-a-teen-singing Reverend TimTom, of course.  And as Frankie tells us, in this way, the Hecks finally get to be Donahues.

The episode wraps back from the future to the kids arguing in the car, nothing but blue sky and open road ahead.  It's the kind of everyday, happy white noise that slices through the sadness of a good thing coming to an end.  Finally, Brick says that this was why he didn't want to sit in the middle (seat, that is; seat pecking order was a real bone of contention earlier on), then does his echo thing and whispers "the middle" as the car rolls on into the cornfields.

So.  What did I learn from the Hecks?  That happy lives are messy lives and that the only real things are the people who love you.  And that you should always, always pack a backup snack bag in case you leave yours on the highway.  I like to think that I already knew those things, but the truth is that I know them better now.

I guess that's what they mean when they say that the truth lies somewhere in the middle.
Posted by The Tote Trove at 9:30 PM

But why not to wear ice-cream? Especially when it looks so super lovely! I just think about now if I like to eat ice-cream or not - but I know for sure I would love to wear it!
xx from Bavaria/Germany, Rena
www.dressedwithsoul.com

Ahhhh the icecreams are so cool
and perfekt for summer. Love it.

take a look at my Blog and my Instgram