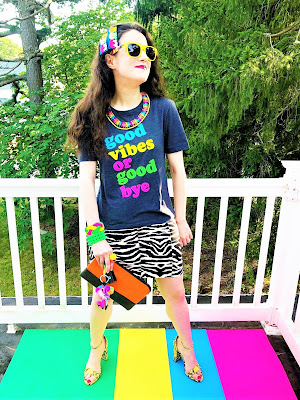 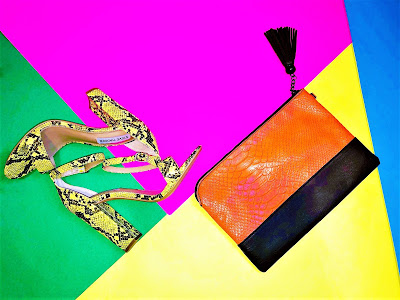 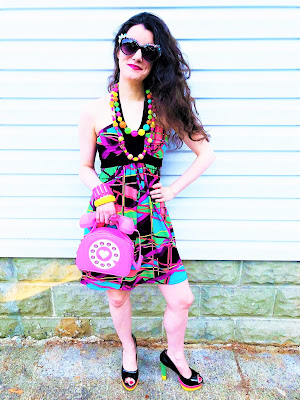 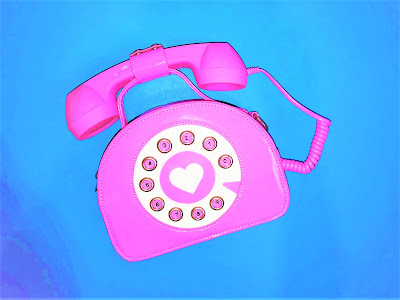 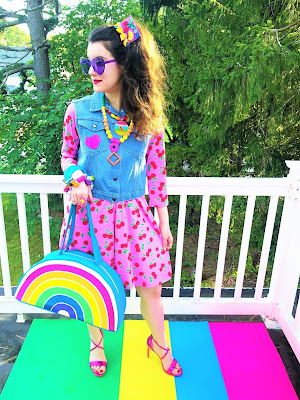 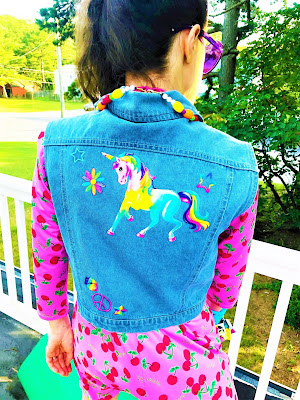 Punky Brewster, funky rooster, what riches have you on your ranch?  Never mind that ranches are for horses, not chickens, and that the richest thing a rooster has is a strong fox in the hen house game.
Back in the day, some people used to call me Ms. Brewster.  And it wasn't even because I wore vests (I didn't).  The reference came about because of my colorful, collage-like aesthetic, which suggested that I just might still have a sticker book.  The first time it happened, I was a senior in high school, and it really annoyed me.  I was in a summer program sponsored by the Rotary Club (don't ask), and it came up in the newsletter, a sort of who's who superlative piece where other girls got to be compared to Natalie Portman (this being the year of Star Wars: Episode One) and Denise Richards.  I thought that my look was daring, maybe even a little subversive, so realizing that I reminded people of a character who pounded juice boxes was upsetting.  The next time I heard, "Hey, do you know who you look like?", it wasn't until I was thirty and at the dentist's office.  But by then I didn't mind as much.  In fact, I even kind of liked it.  Maybe with age I'd grown more comfortable with my kooky persona.  Either that or I was hoping that the hygienist would let me pick something out of the prize box. 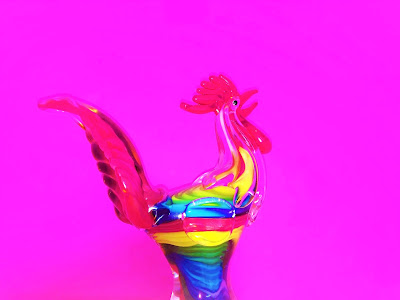 But life's like that, right?  You live and you learn and then you wear more outfits.  It's like my tee shirt in this first pic says: good vibes or goodbye.  (Not that you should always believe what you read.  I once knew a girl who had a patch on her backpack that said "mean people suck," and she was the meanest girl ever.)  This slightly snarky yet profound maxim may be having a moment, but its message is timeless.  To feel good, you have to stay positive.  Even when it's hard.  Especially when it's hard.  Which sometimes (scratch that, most of the time) means kicking not-so-positive stuff out of your life.  Or at least out of your head.
Only then does it all become easy.  Well, easy-ish.
Now I'm proud to be called Punky.  She's a cheerful pop culture icon, and if I remind people of someone that crayon box bold, then so be it.
Just as long as no one ever calls me Vicki from "Small Wonder."  I'm cool with the robot bit, but I don't do housework.
Posted by The Tote Trove at 11:54 PM

That vest!!!!! I am so in love with it! The neon colors make me think of Lisa Frank. ❤️ I'm also loving the Good Vibes shirt paired with the fun zebra print, and the cute 80's-esque dress with the phone purse! The rooster photo looks so cool and pop artsy. "...so realizing that I reminded people of a character who pounded juice boxes was upsetting." That made me laugh!!! That's great that you own it now and are proud of the title. You're definitely the Queen of Colors; you're like a rainbow. 😊 Finally, I love your message about positivity. "To feel good, you have to stay positive. Even when it's hard. Especially when it's hard." Words to live by!

It makes totally sense to me that now you are proud to called with this name! For me you are a wonder and you bring brightness and colour in this world - what is really important! Love as usual your looks and the vest is simply amazing, dear Tracy!
xx from Bavaria/Germany, Rena
www.dressedwithsoul.com

I may have been born in the '70s but I'm an '80s girl through and through. The music, the hair, the clothes. I had piles of clothes similar to yours back in the '80s, Choose Life, Madonna, and Poirot t-shirts, jelly sandals, neon yellow mirrored sunglasses on a matching sunglasses cord, no less, even had those visor headband glasses like what that dude on Star Trek wore.

Loving the outfits, as I scrolled down I thought, ooh, phone bag, I've got one of those, and then I kept scrolling and sucked in air like my lungs were deflating. YOU HAVE A RAINBOW BAG!!!!!