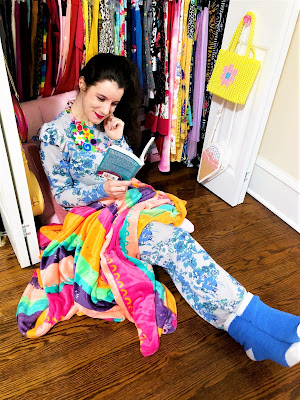 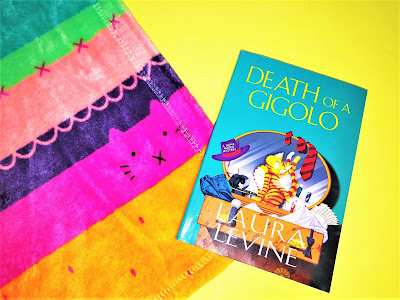 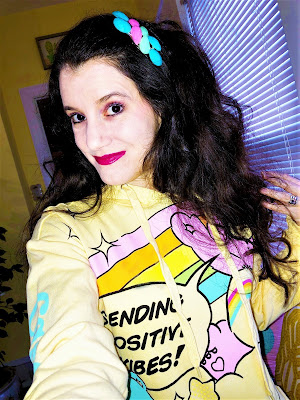 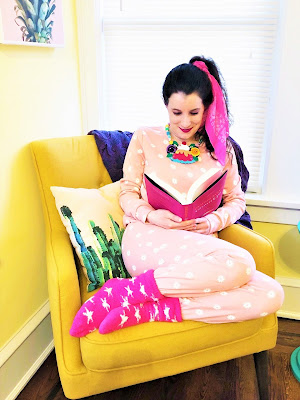 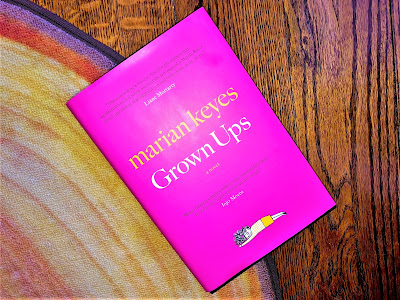 Recently, I revealed how the quarantine has brought me closer to sweat suits.  And I'm as surprised as you are that it's taken me so long to join this particular pajama party -- and, ironically, to discover that there's more to lounge life than pajamas.  Because of all the stars in the sartorial spectrum, sweats are a special breed.  What other attire simultaneously says going for a run and sleeping 'til Tuesday?

To that end, R&R usually means rest and relaxation (no, not rest and running, although that would fit nicely with what I just said, wouldn't it?).  But in this post, it means rest and reading.  And whether you're snuggling up to slumber or to a story, you want to be as comfy as possible.

So here I am, not doing laps, but also not sweating the small stuff.  While wearing my brand-new sweats (try saying that five times fast) and reading two delightful but very different books: Laura Levine's Death of a Gigolo and Grown Ups by Marian Keyes.  If you've read Laura Levine, Marian Keyes, and/or this blog, then you know the drill.  Gigolo is a not-quite ribald romp of a murder mystery chockful of intrigue, hijinks, and, most horrific of all, part-time-private-eye-slash-ice-cream-addict Jaine Austen's (yes, you read that right) attempt to go vegan in the name of true love.  As always, it's cozy, crazy, and reminiscent of sitcoms, which makes sense because Ms. Levine used to write for TV.  Grown Ups, on the other hand, is a chick lit dramedy full of family skeletons, skirmishes, and a good old-fashioned dose of facing up to things.  Although nobody kicks the bucket (except for during a low-rent murder mystery weekend), it's grimmer than Death of a Gigolo.  Sometimes I think that Marian Keyes is the dark side of Sophie Kinsella.  Which is to say that her novels have wit and warmth and glamour -- but also demons.  Gigolo and Grown Ups are both great reads; Gigolo gets high marks for escapist fun, whereas Grown Ups offers a glimpse into the lives of people you probably know.

Still, when even the land -- no, neighborhood -- of make believe (rock on, Mr. Rogers!) becomes too taxing, there are few things more decadent than grabbing a bookmark, thanking the universe for your sweats -- or for whatever makes you grateful -- and succumbing to sleep.

Such a cozy outfit! Love it! Thanks so much for the recommendations of books too. Very intriguing. I have been trying to get through Mexican Gothic..but then I am a slow reader. I've had only one nightmare after reading a few chapters.

My problem was the fact I didn't know it was happening during the 50s in Mexico about some Brits who moved on a mountain and mined silver.

Anyway, I'm glad you enjoy women's fiction. Which these days is kind of a challenge to find.

Enjoying this so much. I have wondered that about Keyes too. Oh, yes, I am a fan of loungewear! Awesome post!

Loved your reviews! Awesome outfit, especially for reading at night!

sound interesting to read death of gigolo...I'll read it.

Have a wonderful day

You're the poster girl for glam loungewear and curling up with a good book!! I love the hot pink coordination between your bow and your socks. And immediately noticeable - The Tote Trove accessories! The "Sending Positive Vibes" sweatshirt is ultra cute. Lastly, you always read the coolest books with fascinating plots, and write great reviews to boot. Happy reading!!!

You've got better looking sweats than me and I love that rainbow blanket.

I've read a couple of Laura Levine's books, there's even one that features me!