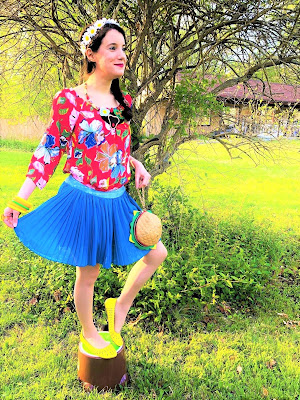 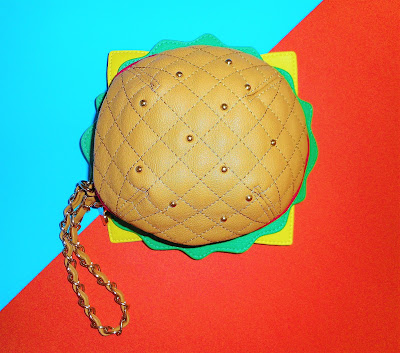 Peace and love and eating meat aren't two things that usually go together.  People of the pacifist persuasion are often depicted as vegetarians, whereas their warlord counterparts are seen salivating over all that is juicy.  Maybe that's why I was compelled to come up with a look that says Woodstock-meets-woodfire-grill.  I like contrasts.  Visually, they offer artistic appeal.  Intellectually, they bridge the space between black and white.  I cotton to the contrast of this particular outfit because I'm a live-and-let live lady who digs both boho duds and Red Robin.  Also, if I'm being honest (and I am, always), then it gives me an opportunity to reheat my Fabulous Felt Steak Dinner Necklace. 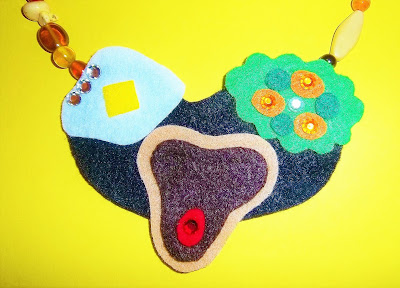 It's an old one, this necklace, so much so that I can now call it aged beef.  Which is weird because unlike wine or blue cheese, I feel like such a so-called delicacy would attract maggots.  But then, my left mini meathook in this pic is pretty weird, too, all lumpy and intense reddish purple.  I wish I could say that its rib-eye-ripe shade is the result of slaying London broil, but the toughest thing it's ever sundered is felt.

Also, truth be told, I eat mostly chicken.
Posted by The Tote Trove at 5:08 PM

I love the hippie-esque photo of you in the field; it looks like a summer dream! Your flats are such a pretty yellow and compliment the daisy headband. The hamburger wristlet and Steak Dinner necklace is such a cute combo and creates that cool contrast between florals and food fun! :) I love how you call the necklace "aged beef", haha!

I really love the title, dear Tracy! And your outfit including the adds as well :)
xx from Bavaria/Germany, Rena
www.dressedwithsoul.com

Great way of taking a pic, and love the burger bag.