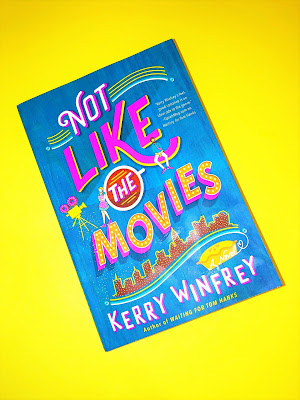 Not Like the Movies is like the movies because it's a novel that's rom com gold.  Kerry Winfrey's (and no, she's not related to Oprah) sequel to Waiting for Tom Hanks has it all: romance, snappy dialogue, and baked goods for days, and it picks up right where Tom Hanks left off.  Big things are happening for Annie Cassidy.  Her first screenwriting coup, Coffee Girl, is about to debut, and she's tying the knot with her very own Tom Hanks, actor Drew Danforth.  But in Not Like the Movies, the spotlight is turned on her bestie, Chloe Sanderson.  Wise-cracking, colorful inside and out, and with a life that's in shambles, Chloe is every inch the quirky, chick flick sidekick.  She struggles to look after and financially support her father, who has early-onset Alzheimer's, while slogging away at a coffee shop and finishing her degree online.  Her only bright spots are the unusual pies she bakes (whiskey apple, anyone?) and the rainbow-rific clothes she wears, both of which help her avoid the mini breakdowns that she refers to as "Five-Minute Cries."  (There's a whole sequence where she mocks marketing her time-limited tears strategy in an infomerical.  Hilarious.)  But as it turns out, Chloe's troubles are only beginning.  Because Annie's movie is all about her and the will-they-won't-they thing she's got going with her boss, Nick.  Chloe doesn't want anything to do with Nick.  He's crotchety and set in his ways, a reluctant coffee shop owner who's thirty going on sixty.  He likes his broody indie rock, thank you very much, a passion he gamely defends to yacht rock-loving Chloe on a daily basis.  He's like Ray from "Girls."  Only cute and not a sad sack.
Unlike Annie, Chloe isn't a disciple of rom coms.  Actually, she hates them (true crime is her thing) and is intent on avoiding love -- making her, as Annie is quick to point out, just the sort of woman-who-has-no-time-for-love about and for whom rom coms are made.  But the thing is, Chloe's likable.  And it's fun -- if sometimes sad -- to join her on her journey of getting knocked down and back up again.  Even when she tries to distract herself from Nick by glomming on to a dense but affable stoner named Mickey Danger.
Sounds like everything else you've read, right?  Some of it is -- which is what makes it comfy.  But some of it's not, which is what makes it clever.  The real beauty of Winfrey's writing is that she (lovingly, reverently) lampoons rom coms even as she celebrates them.  She's a smart, funny woman who owns her adoration for all things girly -- so, a goddess.  She doesn't take herself too seriously and in doing so (not doing so?), shows us that rom coms are -- wait for it -- not always the stuff of fantasies but sometimes the stuff of real life.  And there's no better heroine to deliver this message than Chloe.  She's believable because she's so against it.  Kind of like someone who hates marshmallows (not that I imagine such a freak of nature exists) but then is force-fed a bunch and admits they're delicious.
Which brings us to the point in the book report post where I share my favorite parts.  Or, as I like to call them, passages, because it makes them sound like secret passageways.  Only they're not so secret because I'm telling you.
On Chloe walking down the lackluster hallways of her dad's assisted living facility:
"But that's why I'm dressed in one of my favorite outfits.  A red skirt that flares out to my knees, and a shirt with red and purple flowers, topped with a bright yellow cardigan.  Some may call it "kindergarten teacher chic," but I know what it is to me: a slight pop of color in a world full of beige." (96)
On the outfit Chloe wears to Annie's premiere:
"I chose a sexy/funky dress, one that shows off my body while still mixing patterns, with stripes on top and a green-and-purple floral pattern on the bottom.  It says, Yes, I'm quirky, but also, boobs.  It's kind of like if ModCloth and some skanky store at the mall had a baby." (214)
Yes, both of these "passages" are about clothes.  So no, ahem, secret there.  But they're also about so much more.  Because clothes make the woman.  And this woman's a winner.
That said, Not Like the Movies is as magical as an outfit montage.  Buoyed by a supporting cast of returning characters such as trips-over-his-own-feet barista Tobin, Wookie-suit-wearing Uncle Don, and ferret-obsessed shop regular Gary, it's weird in the most warm-hearted way.  Will Chloe sail toward true love or end up alone like that classic yacht rock heroine Brandy?  I'd say you have to read the book to find out, but let's be honest: rom coms aren't about the world's Brandys.  They're about happy endings, life's pie a la mode.
And that, of course, is why we love them.
Posted by The Tote Trove at 5:37 PM

well written review...
this sentence makes me smile: "Kerry Winfrey's (and no, she's not related to Oprah)."..... hehehe...lol.

"It's kind of like if ModCloth and some skanky store at the mall had a baby." - hahaha! Love that line. Sounds like a truly fun read, and I love how it centers around clothes!

Sounds like a fun book and god knows I need to read fun books these days. No more crying for me! This is going on my to read list.