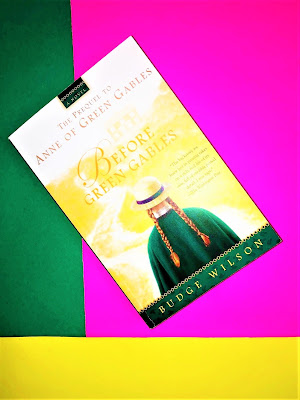 Last week, I finished reading Before Green Gables by Budge Wilson.  It'd been on my bookshelf since Christmas, and I'd been avoiding it.  It's not that I thought I wouldn't like it.  It's that I knew this prequel to Anne of Green Gables would challenge me and everything I knew about Anne.  I felt a little like this when I read Marilla of Green Gables, too.  But finding out about Anne's past was an entirely different kettle of fish.  As you know, L.M. Montgomery's eight-volume series about the little redhead who could is very special to me.  It got me through my tween years, which might sound weird because, unlike Anne, I grew up with two loving parents.  Still, I didn't fit in at school, and somehow Anne spoke to me.  I felt a kinship with this girl who loved big words and pretty clothes and felt like she didn't belong.

Nevertheless, my curiosity got the best of me, and I finally opened Before Green Gables.  And it was worth it.  The whole novel is based on a conversation between Marilla and Anne when Anne arrives in Avonlea:

' "Were those women -- Mrs. Thomas and Mrs. Hammond -- good to you?"  asked Marilla, looking at Anne out of the corner of her eye.

Marilla asked no more questions.  Anne gave herself up to a silent rapture over the shore road and Marilla guided the sorrel abstractedly while she pondered deeply.  Pity was suddenly stirring in her heart for the child.  What a starved, unloved life she had had -- a life of drudgery and poverty and neglect; for Marilla was shrewd enough to read between the lines of Anne's history and divine the truth.  No wonder she had been so delighted at the prospect of a real home." (41)

The way that Budge Wilson (such a curious name!) weaves this information into a new narrative draws you right in.  She starts with the death of Anne's adoring schoolteacher parents in an epidemic (creepy in these current times, no?) when Anne is only three months old.  Then she follows Anne to two foster homes where, starting at five years old, she's forced to clean diapers, carry pails of water, and cook.  Wilson tells the story of women with too many children and not enough money, showing us a world far removed from the charmed and charming sphere of Avonlea.  Wilson's ability to reveal this dark underbelly of Anne Shirley's life while maintaining Anne's sunny spirit lends depth to Anne's character.  Yet even Anne struggles with demons, and she reaches a turning point when she meets the Egg Man, or as she eventually comes to call him, the Words Man.  He sets her on the path to self preservation through imagination.

' "Anne," Mr. Johnson said, quietly and firmly, "listen to me.  Imagining things is not wicked.  It's good.  It's what makes people write books and paint pictures and make music.  It means pretending things.  Go on doing it.  Don't, for heaven's sake, stop, even if Mrs. Thomas gets cross.  It can often rescue you from the depths of sadness."' (137)

There were times when I felt that this hardship and heartbreak were at war with the Anne of my childhood.  But by the end of the book, I realized that the opposite was true, that all of the trials had made Anne tougher without making her rougher, creating a foundation for the strength she would need to chase the life that she wanted.

Anne, of course, finds her way through the woods (literally and figuratively, as both of her foster homes are deep in the forest), even if she first ends up in an orphanage.  There she falls prey to a mean girl who almost destroys her trust in people forever.  But then she finds out that a fine lady is coming to adopt a hard worker -- ironically, by way of one of the mean girl's schemes -- and scrubs like she's never scrubbed before.  The rest, as they say, is history.  Anne gets adopted, and the mean girl is left behind.

Ultimately, Before Green Gables is about hope.  It shows that if you hang in there, you'll be rewarded.  It's a beautiful book, and I'm better for having read it.  But now that it's done, I'm ready for something lighter.

Like a nice, cheerful murder mystery.
Posted by The Tote Trove at 11:54 PM

"It's a beautiful book, and I'm better for having read it." - You can't ask more from a book than that!! I'm so glad you enjoyed it. ❤️

There's just something about books concerning the welfare of children, or the death of a child, that makes me want to miss it. It makes me too sad on too many levels, and even though the last few centuries of human beings have made many have too hard a life, it's just not something I wish to read or write about anymore. Anne of Green Gables was never something I really went into, so I'll give this a miss.