On Her Own but Not Alone: A Woman of Her World 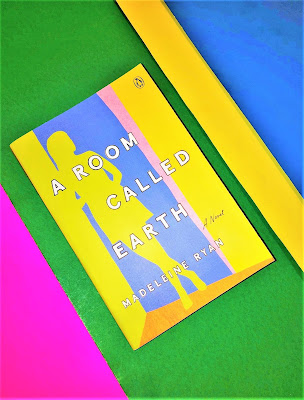 When I was reading Madeleine Ryan's A Room Called Earth, I dogeared so many pages.  But all the words that stuck with me seemed to boil down to these:

"Idleness, or appearing to be lost or alone, or like you're reflecting upon something, isn't valued in social environments.  Even standing still for a tad too long or just noticing the fact of existing is considered to be distinctly unproductive and antisocial.  It implies that we haven't been chosen." (146)

It's not often that I begin a review with a quote.  But that seemed like the best thing to do here.  Because if I started by saying that this novel is about a young woman going to a party, then you might expect a rom com with a meet cute and a heroine who snorts when she laughs but is otherwise normal.  But A Room Called Earth isn't like that.  It's about a woman who is autistic -- and the author is too.

The woman in the novel doesn't have a name.  But she spills her thoughts in an unfiltered monologue that lets us get to know her better than any of the people she actually meets.  Although she's at a party, holding her own, fighting awkward exchanges with her blunt brand of finesse, her main concern is being her own confidante.  It's not that she wouldn't like to make connections; it's that the system is flawed, its players untrustworthy.  Other people, after all, have a way of poisoning relationships with their agendas and need for competition and gossip, a sad truth she's gleaned from experiences with a large number of friends and boyfriends.  I thought that an autistic woman wouldn't have sought out so many others, but then, maybe that's the point.  That those relationships didn't work.  Even though being with people and belonging is what the world demands.

That said, she does meet a guy, and he seems to be into her.  What happens next is as far away from chick lit as a swan song is from a scar.

Sometimes funny, always melancholy, A Room Called Earth isn't for everyone.  But it should be.  Because autistic or not, we all sometimes feel like the world is performing a play in a different language.  And in the chaos of that disconnect, there's something poignantly hopeful about a woman who chooses herself.

This does sound so enlightening! I think as a person some of us come more aware of our surroundings than others. But as life is there are those who see someone and typecast them right away. And of course, they might be so far from the truth. I don't know why, it makes me think of an acquaintance I met at the library..who initially thought she knew me from "church" and as I got to know her I realized she was bipolar with a teenage son who of course, in the end had to take care of her. But, I never could explain that I was not who she thought I was. Which I think happens to many of us as we go through life. I don't know how many times I heard in an interview, "but you look like a preschool teacher"..naturally, I would bite back, "But I don't want to be one of those." Then on the other hand on the internet, I have more 'signs' as being autistic myself [I had done so thinking a co-worker must be by some of the actions she did at work..who never acknowledge people and would just take things for no reason] BTW I still haven't figured her out, but she only puts books away.

THANKS for this insightful review! THANKS for your comments too. I'm glad you like the banner. It was good to revisit Steve and Victoria. Although, I am still uncertain what Victoria is hoping to find or do. But sometimes, we are curious about things we shouldn't be. And Vanna, she does have a tendency to hate everyone and everything and yet there is a lot she wants too. Although she might be in conflict with her standards. It's been fun to write a bit of a scary story this Ocotober, too.

Now I have to see if I can find this book at the library. It looks so character-driven. Thanks so much for sharing this one. Oh, when I think of you mentioning "Bell-Jar" I guess I first read it in high school and I was so enamored with this book. But when I revisited it a decade or so later I was really mad at myself for being taken with it. I found it terribly depressing. I have a feeling I would crying while reading A Room Called Earth.

It's good to hear from you and thanks so much for your comments. Well, I feel like I might be writing two sides of the coin with Pix & Cyrus and Frankie & Bea. Oh course, I might be just fangirling Leo Lou too who is "Frankie". I had found a picture of him when he was younger and used it in "the Paulie story". I didn't realize this guy had been in a boyband ages ago. I swear his face was fuller then than it is now. Of course, I like the idea that Bea wants to fatten him up. But then again, will they ever be friends?

I hope all is well with your crafting and you are having a wonderful October.

Oh I love Lizzy Caplan (especially in Party Down!) and of course, Zooey too. Yes, I loved NEW GIRL!

It's apple cider donuts time here too! And they are the best! It's been ages since I've listened to Of Monsters and Men but I thought their music felt like October.

At least, I got a slouchy hat made for a co-worker who's leaving. Sometimes, I feel..oh just crochet and see what happens. Although, I do love a good beret.

This sounds like a fascinating book. Such a beautiful review! Interesting quotes too! All the best to staying creative and finding lots of great books to read and of course enjoying everything the month has to offer.

I didn't know of this author. Thanks so much. It looks like a very cool read. And a lot of enlightenment about so many things in this world.

I will confess I was the girl left with the guy no one wanted anything to do with at our college get to gathers. I think of the time with my "so-called girlfriends" we were to stay clear of the blond dude because he was the chosen one and I got coaxed into being with the shorter hairy dude (who was clearly different but we had some good conversation and found at the end he was probably smarter than most anyone there) Although, about a month later when all those dorm girls had gone home for the summer, the blond guy did find me while I was at the pool. Talk about surprised and the idea that he'd see me in my green Olympic style swimsuit and my glowing white skin I kept looking around thinking he must have been speaking to someone else. Anyway, we hung out for the rest of the summer.

This type of a story delves into a world or mind that is very different. It's interesting to explore the main character's perspective, her feelings, and her needs. Sounds interesting and enlightening about a subject that we sometimes know little about.

Holy smokes this book sounds good. Wow!!! I love the fact that it explores the inner monologue of an autistic woman. I own a book called "I Am Aspien Woman" which is a picture book collection of autistic women's stories on each page, and it's fascinating! I imagine this book would be too. I love the quote from page 146 you started out with! Instantly got my attention. I also love what you wrote here: "Other people, after all, have a way of poisoning relationships with their agendas and need for competition and gossip, a sad truth she's gleaned from experiences with a large number of friends and boyfriends." Sad but true fact of life! Awesome review. 💕

I don't know the title, but it seems to be a very important book on the subject.

I didn't read this book. Thank you for recommendation. I will check it.

This book is new for me. Have to check it out in our library. Thanks for the review.

Mmm, I disagree with the quote, but the book sounds interesting.