Hangin' Around This Gown: Oops, I Mean Tee Shirt 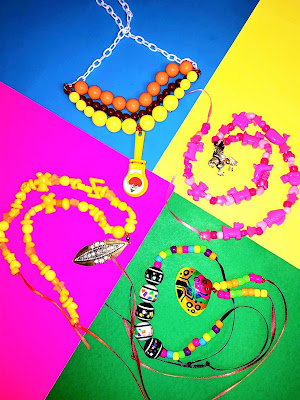 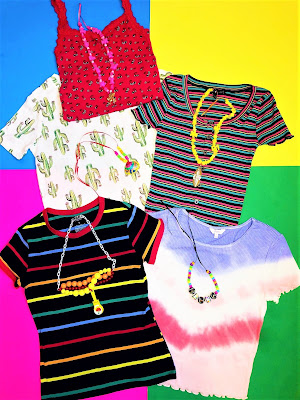 That was a bad bit, even for me.  But as I hang around my house and dig ever deeper into my craft stash, I'm running low on more than just humor.  Like clasps.  And wire.  And beads that don't look like they came out of a Jamesway gumball machine.  And so I challenged myself to turn my frown upside down by making the best of what I've got.  No wire?  No problem!  I summoned my satin ribbon from the bench and said, "Look alive!  Don't let those metalheads get into your heads and make you think that because you're soft you're weak.  Braid and knot and move like you're being chased by scissors.  Like scissors, I say!"  To be fair, they were being chased by scissors, and the person wielding them was me.  But you don't get anywhere without a few head games.

Now, I'm not saying that second string satin became the MVP.  Or that I'll be forsaking wire when the craft stores are as wide open as Nebraska.  But I did derive an unexpected joy from working with a material so fluid and, yes, artsy-craftsy.  Sliding pony beads along the colorful strands made me feel like I was at camp, only better because at camp they use yarn and also because camp is the worst (tube-laced mystery meat, I'm talking to you).  It was fun to rummage through my junk drawers, too, which I did to come up with the pendants.  I found one of those perfect seashells with a hole at its base and a plastic noisemaker graced with a clown that came out of a New Year's Eve cracker.  The clown is scary but awesome.  As clowns should be. 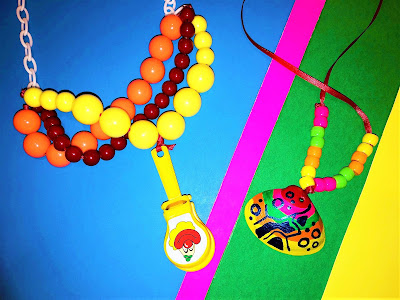 Upside Down Clown Necklace, Tahiti Graffiti Necklace
So, now what?  If you know me at all, then you know that I'm a sitcom and-a-half away from ordering some wire.  Which I could have done in the first place.  But there wouldn't have been any adventure in that.  Not to mention any clowns.

To that, I say this:

Love how creative you got with your necklaces despite being low on clasps and wire!! The seashell is so eye-catching and the clown noisemaker is so playful and fun! Great way to brighten up a group of T-shirts. :)

Love the fact you used a noisemaker as a pendant.